The classic "P.A.F" sound is closer than you think

Epiphone's ProBucker™ humbucker has quietly become one of the most talked about pickups in the industry. It has fooled experts, vintage purists, and even luthiers who have worked with the best vintage examples from the late 50s and early 60s. Epiphone ProBucker™ humbuckers are the real deal--made with 18% Nickel Silver unit bases and covers, the same alloy used by Gibson at the Kalamazoo factory when the humbucker was first invented. The use of Nickel Silver reduces the occurrence of eddy currents due to low conductivity and provides a more transparent and crisp output. The size and shape of the bobbins also has a great impact on tonal response. And the bobbins used on ProBucker™ pickups duplicate the size and shape of the gold standard in the industry, Gibson humbuckers. Epiphone ProBucker™ pickups also feature sand cast Alnico II magnets, high quality 4 conductor lead wire, and are vacuum wax potted to eliminate microphonics.

The Gibson Firebird is a solid-body electric guitar manufactured by Gibson from 1963 to the present.

The Gibson Guitar Corporation released several new styles during the 1950s to compete with Fender's solid-body instruments, such as the Telecaster and Stratocaster. After success with the Les Paul in the 1950s, Gibson's popularity began to wane in the 1960s. Fender's colors, shapes and multiple pickups were endorsed by notable guitarists. Gibson's guitars, most of which were hollow or semi-hollow designs, seemed old-fashioned. Coupled with higher prices, this contributed to a decline in sales.

Gibson had made forays into radical body shapes – the Flying V and Explorer in the 1950s – which met limited initial success. The president of Gibson, Ted McCarty, hired car designer Ray Dietrich to design a guitar that would have popular appeal. Under Dietrich, the Firebird took on the lines of mid-50s car tailfins. Dietrich took the Explorer design and rounded the edges. The most unusual aspect is that the guitar is "backward" in that the right-hand (treble) horn of the body is longer than the other. Thus, the original Firebirds were unofficially referred to as "reverse".

The Firebird is the first Gibson solid-body to use neck-through construction, wherein the neck extended to the tail end of the body. The neck itself is made up of five plies of mahogany interspersed with four narrow strips of walnut for added strength. Other features were reverse headstock (with the tuners on the treble side) and "banjo"-style planetary gearedtuning keys. The special original Gibson Firebird humbucking pickup(s) – single, dual or triple – were smaller footprint versions of standard Gibson humbucking pickups, but were unique in that inside each of their smaller bobbins contained an AlNiCo bar magnet (standard humbucking pickups AND mini-humbucking pickups have one bar magnet that activates the 6 iron slug poles of one bobbin, and 6 iron screw poles of the other bobbin). Original Firebird pickups were also built without any specific bobbin fasteners – their bobbins (and possible "reflector" plate under the bobbins) were held onto the frame during both the wax potting process (to reduce/eliminate feedback and unwanted noise) and the solid metal cover that was soldered to the frame base. There are no screw poles on Firebird pickups. Some Firebirds from 1965 featured Gibson's single-coil P-90 pickup.

The Firebird line went on sale in mid-1963 with four models distinguished by pickup and tailpiece configurations (see below). Unlike the Les Paul and SG line, which used the terms "Junior", "Special", "Standard" and "Custom", the Firebird used the Roman numerals "I", "III", "V" and "VII". Gibson's line of Thunderbird basses is rooted in the design of the Firebird, and uses even Roman numerals ("II" and "IV") to distinguish it. From 1965 to 1969, Gibson introduced "non-reverse" models after failing to achieve marketing success with the unusual reverse-body design. Gibson had also received complaints from Fender that the Firebird headstock mirrored the Stratocaster and that the body violated Fender's design patents, with Fender threatening a lawsuit. The "non-reverse" body is a more standard double-cutaway design, with the bass horn being longer than the treble horn and the headstock having the tuners mounted on the bass side. It also had a standard glued-in ("set") neck rather than neck-through construction, as well as other, less noticeable changes in design and build. Pickup and tailpiece configuration for the V and VII were the same as the earlier "reverse" models, although the I- and III-models were now shipped with two or three P-90 pickups and plain vibratos. After a few years of disappointing sales, the "non-reverse" line was dropped. "Reverse" body Firebirds were first reissued in 1972, with a commemorative "Bicentennial" model released in 1976 which was made available in a variety of finishes including black, vintage white, natural, and the traditional sunburst. The bicentennial model was also distinguished by gold hardware and a red-white-blue logo on the white pickguard. The logo on most other models is red.

The "reissue" Firebirds are usually based on the original reverse body design, though Gibson reintroduced the non-reverse Firebird in 2002 as a Custom Shop guitar. Many types have been released. Epiphone, owned by Gibson, also issued Firebirds.

Beginning in 2010, Gibson stated that they would no longer be creating banjo tuners for the Firebird.[1]

Gibson reissues of the Firebird do not use the same pickup build that was originally introduced in 1963. The modern Firebird pickups have more output (volume), more midrange, and less treble "bite" than the original design.[2][3] 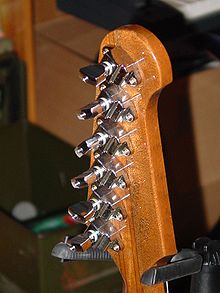 The distinctive "banjo" tuners on a Firebird V

In July 2019, A former Gibson employee released a video purporting to show the destruction of several hundred Firebird X guitars by driving a tracked excavator over them.[4] The video was met with incredulity and speculation about the true reason for the destruction.[5]

Fly With The Firebird

The Gibson Firebird rocks a reverse body and headstock design as originally introduced in 1963 and was Gibson's first neck-through-body design. The traditional 9-ply mahogany/walnut neck through body construction provides rich, warm tonality and incredible sustain. A slim taper neck with a bound, rosewood fingerboard and acrylic trapezoid fingerboard inlays offers fast and effortless playability. The newly refreshed Firebird is outfitted with the redeveloped Alnico V Firebird pickup to recapture the scorching output and searing tones of the original voice for which the Firebird is known. Available in 2 classic finishes: Tobacco Sunburst and Cherry.

This item is out of stock, but we build most left-handed guitars on demand. Learn More

Find in StoreHow to Order

An error has occured and this guitar could not be added to your cart.